If you’re looking for a market to grow your business in this uncertain economy, look no further than Vietnam.

It’s not a secret the global economy has been shaking things up for businesses around the world. Even with the recent “Phase one” trade deal between the US and China, there’s no guarantee things will return to its original state within the near future.

So what makes Vietnam such a great opportunity for business ventures? 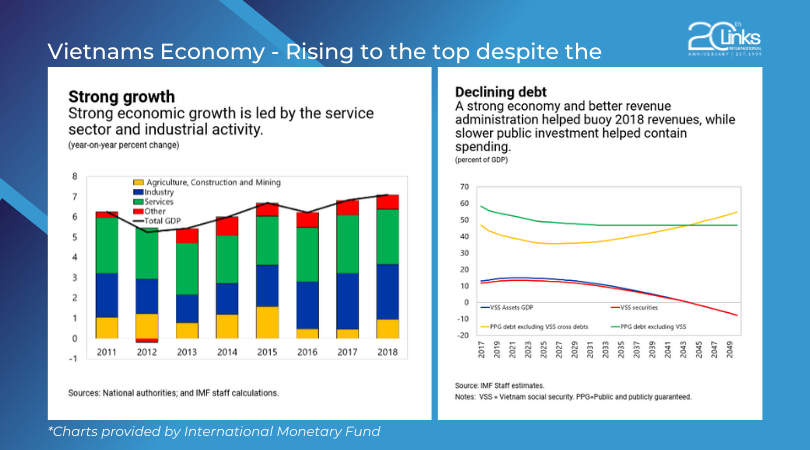 Business friendly policies and macroeconomic stability are some of the more alluring charms of the Vietnam market.

In the break of trade tensions that started in 2018, while other nations were suffering from the rising trade tensions, Vietnam witnessed a low inflation and broad-based growth, proving its credit as a market of opportunity.

The strong government in Vietnam  has also helped to reverse the rapidly rising public and publicly guaranteed debt. This was down 4 points of GDP by the end of 2018 from the peak in 2016. Then in 2020, the budget deficit is projected to decline 4.2%, demonstrating the successful efforts of the government.

What You Need to Know About Vietnam’s New Labour Code

Officially passed on 20th November 2019, the new Labour Code will come into effect on 1 January 2021. While it may be due in over a year, here’s why businesses should not overlook the impact and implications of this update to the labour code.

The new labour code in Vietnam is set to replace the current laws dating back to 2012. By the time the new laws are in effect in 2021, the old law will be 9 years old. This long overdue labour law update signifies an evolving market and the reason businesses should take note of all that is changing.

Updates from the Vietnam’s new labour code isn’t simply an operational matter. Besides updating certain business practices and policies, this new update also indicates a need for businesses in Vietnam to update their HR approach.

Similar to Thailand with its recent changes to the Thai Labour Protection Act, these updates in labour law reveals a growing expectation from fast developing countries to improve the working standards for their people. This also reflects changing expectations from the workforce to be treated more fairly. This will be especially important for businesses looking for the top talent in the market.

Changes from the new labour code is expected to impact organisations recruiting labour in Vietnam significantly. The revisions and supplements to several provisions applies across all chapters of the current labour code in Vietnam. Here are some main changes we’ve highlighted:

There’s also a softening on the labour term to promote employment of foreign and elderly employees under definite term which in turn pushes for a permanent employment of locals.

Updating labour practices with current habits and technology, labour contracts made via electronic methods are now formally recognised. Even verbal contracts are recognised as binding for definite term contracts of less than a month.

Want to elevate your HR function effortlessly? Learn how you can do that with Links HR Outsourcing.

Thankfully, an additional day of public holiday will be added to the existing National Day. The schedule  of the day (either on 1 or 3 September) will be decided annually by the Prime Minister.

The new policy allows for earlier retirement within 5 years of the retirement age for employees doing labour intensive work including heavy, dangerous, or hazardous work.

Shifting Workforce Expectations
The evolving movements in labour policies indicate a demand for fairer working practices and arrangements. Businesses will need to anticipate the evolution of markets, especially given the uncertain economic climate in order to appeal to the right talent.

Labour Legislation Updates & Practices
Aside from Vietnam, other countries like Thailand is also updating their labour policies to create a fairer and more inclusive working culture. Stay informed and up to date with the latest legislative practices, get notified of the latest HR insights and updates by subscribing to the Links’ mailing list.

Stay Compliant – Review Your Business Practices
Audit your current practices, this will be important for both businesses moving into Vietnam and businesses who already have a presence there. Do this effortlessly by partnering with Links payroll outsourcing services, as part of our onboarding process. Our team will make sure that your payroll practices are compliant and up to industry standards.

If you would like to learn more about our services, get in touch with one of our representatives or sign up for a free demo.

Links International is an industry leader in innovative HR outsourcing with services such as payroll outsourcing, visa application, Employer of Record (EOR), recruitment and more! Contact us for more information on how we can help leverage your HR function.