The topic of millennials has had a growing popularity in recent years, especially in November of 2016 when there was a spike in interest on the topic. This was also the time when Simon Sinek’s  talk on Inside Quest regarding millennials in the workforce blew up.

This 15 minute video, now with close to 8 million views, is Simon Sinek’s attempt to answer the ‘Millennial Question‘ which is loosely summarised in the following way:

Millennials as a generation are tough to manage. They’re accused of being entitled, narcissistic, self-interested, unfocused and lazy. And they are saying “we want to work in a place with purpose and to make an impact”. However, this is all because they were dealt a bad hand from failed parenting, which permitted them to behave the way that they do.

As an opinion leader in the business world, Simon Sinek is one of the more influential perpetrators of this ongoing stereotype that millennials are  a generation of disorganised and entitled youth. However, as convincing as he sounds, and as much of a fan as I have been of Simon Sinek, there is much of what he says here that simply isn’t factual.

A Generation of Entitlement

One of the most dominant beliefs about millennials is the idea of entitlement. Millennials are commonly seen as a generation of self-absorbed people and the rise of social media and “selfie” culture simply strengthens the case of people holding such beliefs.

The reality is, every generation has been the “Me Generation”. The only difference is that technology was not there to document their every single move as it does now. In fact, in a study of hours spent on social media, it was found that millennials were more inclined to unplug during vacation/ down-time, with 49% of American millennials saying that they were “willing to unplug on vacation”, while only 37% of people between the ages of 40 and 50 were willing to do so.

Also, millennials are often seen as the self-serving generation with regards to showing little loyalty to their jobs compared to previous generations. This is true, to an extent. That is, if you were to compare the current generation who are in more junior roles to the previous who now occupy more senior positions in the company. However, when compared to a Generation X worker when they were the same age, millennials are actually found to be staying longer with their employers. 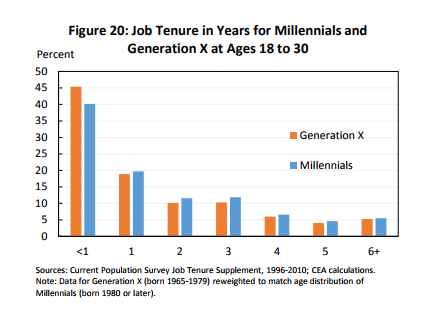 While it’s easy to buy into the narrative of millennials being a kind of their own, this kind generational stereotype has long existed before this generation. The truth is, there is a lot that is similar passed down from generation to generation. Instead of condemning the differences, perhaps the more helpful attitude is to identify these differences to gain a better understanding of how the economy on the whole is evolving.

Looking around, there are many articles that still portray millennials as the latest generation to the workforce, chipping in on the discussion of how to manage said generation.

Many overlook the fact that the oldest of this generation are already in their mid-thirties and are gradually assuming more senior roles. This is also true due to the gap in generations. With not enough generation Xers to fill in the roles of the boomers, many millennials find themselves assuming senior roles at a younger age than their predecessors.

Characteristics of a Millennial Leader

While a lot of what is appropriated about millennials is false, that is not to say that we must dismiss all differences. In fact, there are some marked characteristics that are distinctive to this generation, who were raised in a time of some major revolutions and technological advances.

The New Normal of Change

One of the most notable aspects of millennials compared with other generations is the unprecedented pace of technological advancements that have been experienced in their time. In mere decades, whole industries were formed and, during that period, we saw companies that thrived while many more disappeared without warning.

A hallmark of millennials has become their acceptance and ability to deal with uncertainty and change. While past generations were more comfortable with staying in one job or career for most of their lives, in this generation, people will be not only be more comfortable with change, but many will even pursue change in order to accustom to their changing lifestyle.

Since they themselves are raised to be a generation on their feet, as leaders, millennials will also expect a greater level of agility from their teams. Nowadays, there is an increasing trend of using “contingent workers”, which is also a phenomenon of this change in mindset. With optimisation being the new golden standard, people are moving into more short-term and measurable work, while the idea of job security slowly becomes more and more irrelevant.

A Different Understanding of Pace

Undoubtedly, a generation raised in the age of the internet will have a vastly different approach in their ways from past generations. WIth the internet, we now have an open access to knowledge and other resources like never before. Unlike the past, when everything and everyone was less connected, now everything runs at triple speed, with companies always pining over “The Next Big Thing”.

Regardless of which generation you’re from, as witnesses to the many technological advances, we are not foreign bystanders of this fast pace. Just looking at this commercial by Samsung all but a few years ago, you may notice how many of us have already moved on from that technology, yet the message of finding the next big thing is still ever prevalent, if not more so.

Raised in an era of openness, millennial leadership is also more direct in their ways when compared to leaders of the past, with a preference for directness and plain-talk over being politically correct and censored speech.

While every generation has its fair share of innovative entrepreneurs, millennials are markedly more willing to take calculative risks than their predecessors. In this time of globalisation, every new connection is presented as an opportunity. This, along with the general economic downturn, means that many prefer to depend on themselves rather than slave under institutions, which to the likes of Lehman Brothers have proven to be less than reliable.

This passion-driven population of leaders therefore are believers of action and will not blindly follow orders nor expect their people to follow without question.

Despite the constant attention that is placed on this generation and the much perpetuated image of a sharp change in behaviour, the reality is we’re all currently living and gradually participating in this evolution.  Already underway is the epic turning point in workforce and all of economy. But instead of taking everyone by surprise, the more likely reality is that everyone has a part to play in this turn of events and are more prepared than they realise.

Want to speak to us about our award-winning recruitment and HR outsourcing services ? Find out how we can help you grow your business and reach your career potential, contact us now.