Is Asia the next big break for global retailers?

It’s a known fact that Asia is a sitting goldmine for businesses around the world. Asia’s quickly rising disposable income is major reason why it is a great breeding ground for growing retail businesses. In recent years, China has shown massive growth in income, dwarfing that of the States. By 2030, Asia-Pacific is predicted to have 66% of the global middle-class population, more than double of that in 2009 (28%), making Asia a very attractive market for major businesses. 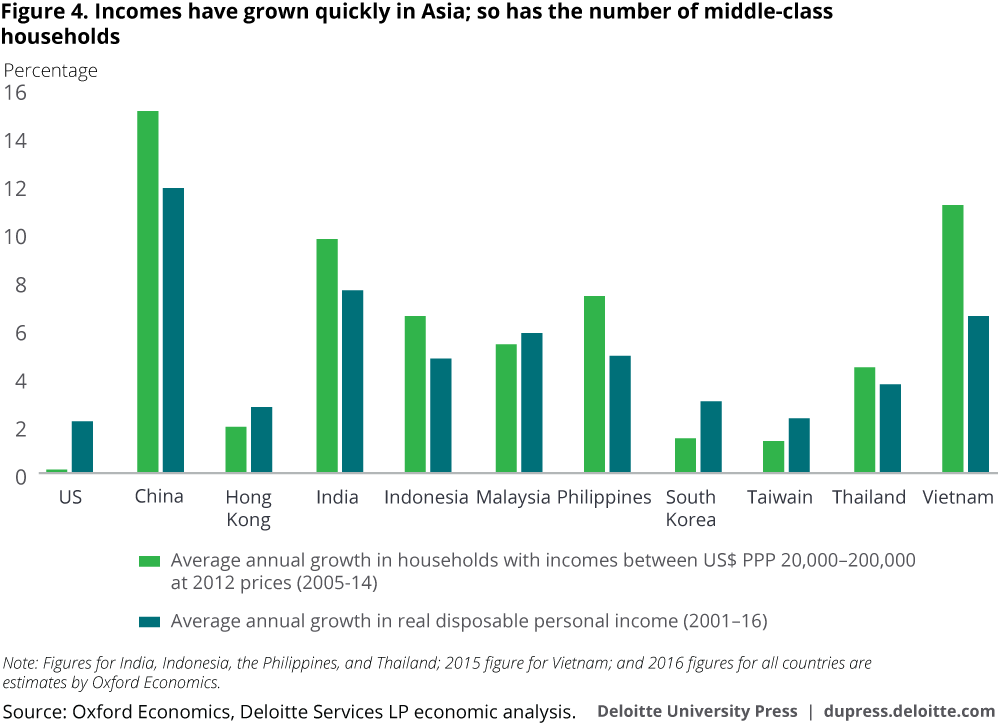 According to insights from Deloitte, in 2016 the combined nominal retail sales of 11 key Asian countries, excluding Japan, was estimated at 6.6 trillion USD to US’s 3.9 trillion USD. This is an immense growth from the 1 trillion USD seen in 2001. From this, we see the growing potential that lies in Asia’s retail industry. 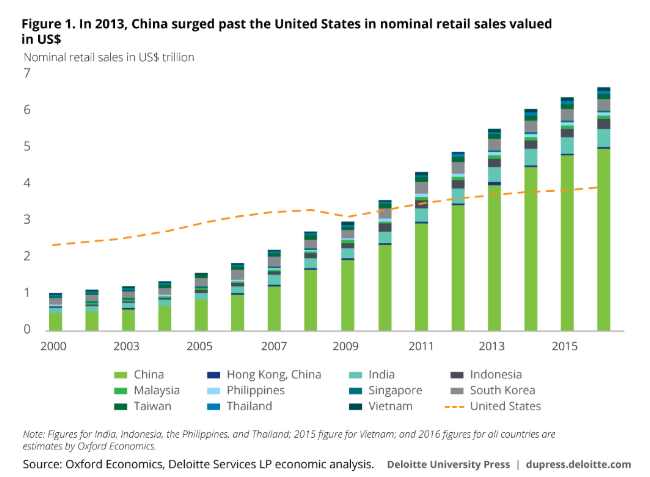 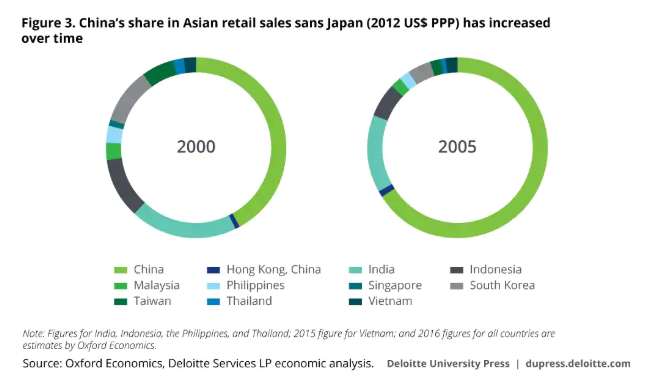 Many businesses has already latched onto this chance. Locally, major traditional retailers like Aeon from Japan and Lotte from South Korea has beefed up their online presence in recent year, as well as enter into the Vietnam market, expanding their reach in Asia.

Opportunities aside, for retailers looking to venture into the Asian market, it isn’t without its challenges. Even the enterprise giant, Amazon, fell short from the graces of Chinese consumers. Compared to the competition of Alibaba and JD.com, which holds 67% of China’s online retail market shares in total, Amazon Prime’s offering of fast and free delivery just pales in comparison. For any retail brand trying to enter into the Asia market, they face a unique set of challenges and opportunities specific to the region.

For every business, growth is a goal that is pined after. This battle for greater market shares is even more apparent in the retail industry, as businesses venture into new markets. With technology, new ways are formed for businesses looking to expand their reach and engage with consumers.

Something that’s caught on in the market in recent years is e-commerce and the use of online shops. In among this new wave of retailing is mobile or m-commerce. As major MNCs and global retailers dive into this new wave of selling to consumers, the potential of m-commerce becomes more and more evident. While one may think the rise of internet retail will drive down the value of physical stores, we’re finding that the opposite is true. In fact, greater brand adoption is found when online is coupled with offline retailing, with businesses finding most success with O2O (online-to-offline) strategies and omnichannel retailing.

As smart devices become an everyday commodity, so does mobile retailing. M-commerce can take on many forms. From mobile-friendly websites, to apps made specifically to make buying on-the-go feel second nature. M-commerce is aimed at broadening the boundaries of when and where one can make a purchase. It was this goal of making purchases easier for consumers, that gave birth to O2O strategies and omnichannel engagements.

O2O and omnichannel retailing opens up a new level of connectedness. Prior to the internet, in order to reach and engage with more customers, the best thing businesses could rely on doing, was to open multiple channels of engagement. Omnichannel retailing takes this a step further. Now, companies can combine the experiences across different platforms. By incentivising interaction from one platform to another, companies can perpetuate the engagements with their consumer from online to offline and vice versa.

Omnichannel is different from traditional stores retailing in that the experience with the brand is extended beyond the purchase. For example, an omnichannel strategy may be to introduce discounts for people who are willing to like or follow the brand’s social media platforms. By doing so, brands open up a new outlets to reach their customers in, allowing them to further sell or advertise to the consumer. On top of that, they also take advantage of the consumer’s circle of influence, attracting new potential clients. 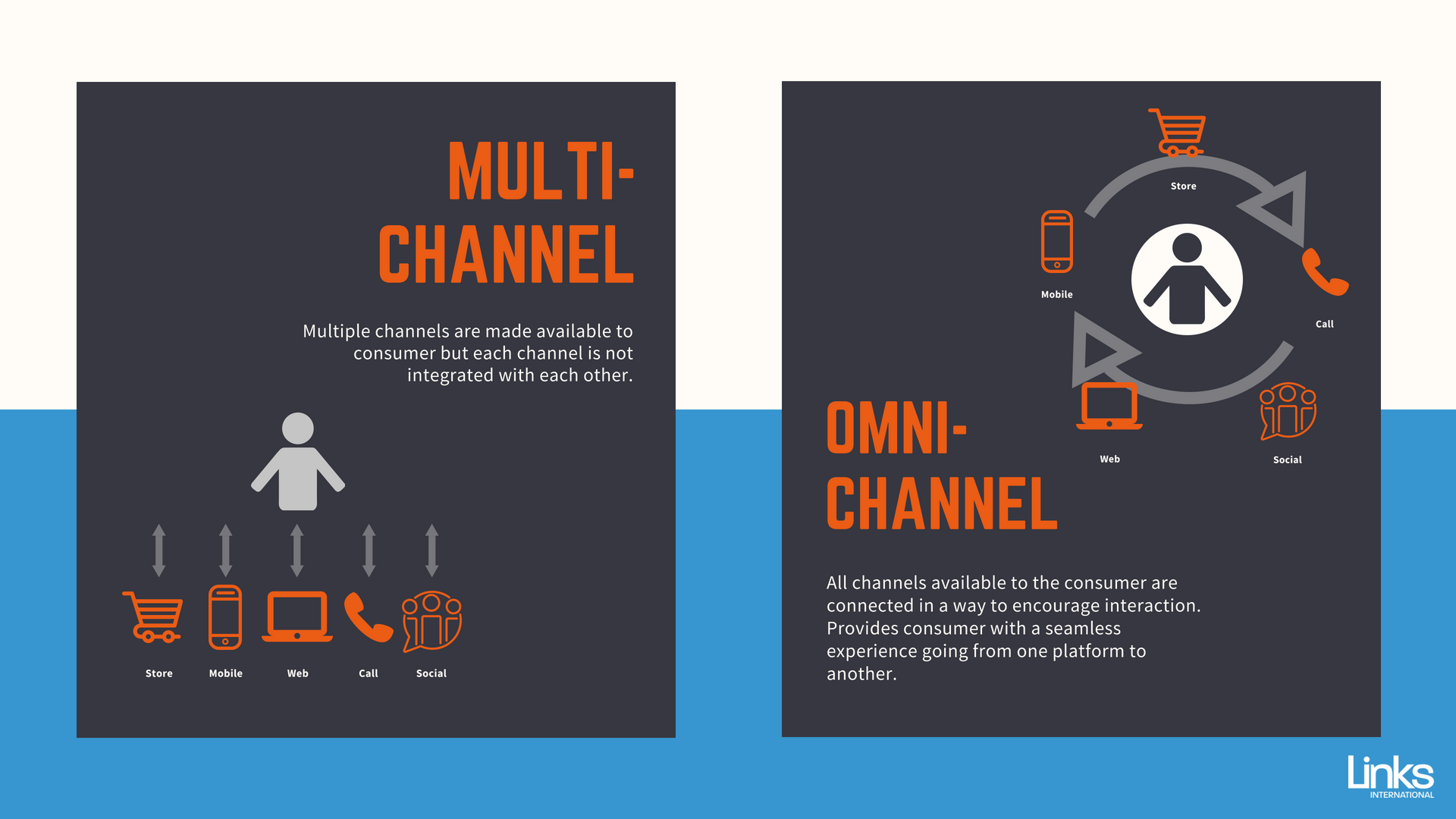 The cycle of engagements

Eye wear company, Warby Parker, is one of the more successful examples of omnichannel retailing. Valued at 1.75billion USD, the retail disruptor offered innovative services like the home try-on program. The brand stands out with it’s intelligently maneuvered omnichannel strategy. Using online data of existing consumers, they open stores in areas where most their customers are already located. As a result, Warby Parker found that 75% of the people who make a purchase at the store, are people who has previously visited the company’s website.

Successfully using O2O strategies, their method exceeds the average 51% of people who search online prior to making a purchase in-stores. On top of that, to complete the cycle employees in-stores are prepped with iPads. They offer to take and send back photos of customers trying on different glasses, encouraging further interaction with the brand even after leaving the store.

Though we’ve pulled an example from the States, we would argue that in fact,  Asia-Pacific has a greater potential for growth in the area of omnichannel retailing and overall internet commerce. Compared to the U.S., Asia has demonstrated a greater acceptance towards purchasing via mobile.

A reason for Asia’s  appetite for mobile retailing is due to the “Internet Leapfrogging” phenomena. Internet leapfrog refers to the late adoption of internet technologies. One would think that this may give late adopters like Asia a disadvantage, but in reality, the opposite is demonstrated. As opposed to early adopters like the U.S., people in Asia are introduced to internet in its heyday. This allows them to form a more positive relationship with the technology as they bypassed the experimental period of laying the groundwork for this newly created platform. As a result, Asia has a higher adoption rate for new technologies.

Compared to the rest of the world, Asia-Pacific (23%) has the greatest share of mobile shoppers, followed by Latin America (18%), North America (15%), and Europe (14%). Not only that, but according to PWC, China consumers in particular show a higher acceptance and susceptibility to mobile marketing and advertising.

Globally, 16% of people will click on an advertisement online that is relevant to them, while in China, this percentage is almost doubled, at 31%. In addition, Chinese customers show a greater willingness to endorse (79% of Chinese customers as to 46% globally) brands after a positive experience over social media, with 71% spending as a result of such interactions (44% globally).

Currently,  with the behavioural habits within China, it produces the best climate for growth in internet retailing. According to a survey by PWC conducted globally, people in China are more likely to frequent an online store via mobile. 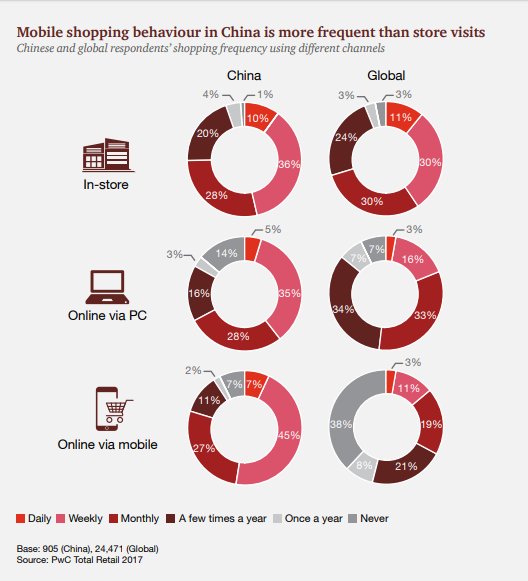 This wave of internet retailing is further motivated by advanced developments in digital wallet and payment across Asia-Pacific, with China being the leader of this trend.  Studies predict that this year, more than half a billion consumers in China will be paying via mobile devices at physical stores. According to Yuesel Yelken, CEO & Founder of yStats.com, Asia-Pacific with their high adoption rates of mobile payment technologies, may be the first cashless societies in the region. With new investments in digital currency, it makes Asia the best place for growth in internet retailing.

However succeeding in this environment takes certain qualities. To take on such a culturally rich and diverse audience takes in-depth market research, and knowing the people locally. To understand the needs and desires of the local market while keeping true to the character and personality of the brand. In an economy built from rich interactions and customer engagements, the ones that prosper will ultimately be brands that have a clear identity and willing to adjust their strategy to appeal to locals.

There’s many ways a brand can do to get themselves ready to enter into Asian retail market. However, one of the fastest ways of expanding is by partnering with the right people and services. By building the right relationships with people on the ground, businesses can better navigate the terrain and make more informed business decisions.

Companies new to the culture can also consider acquiring professional services to shorten the settling in period and quickly focus on reaching out to clients. Also make sure to look at the different legal requirements of setting up a business,as the level of complexity will vary depending on the country.

A helpful tool for those looking to expand their business into Asia is through professional PEO or Employer-of-Record services, which gives you the flexibility you need to succeed in a new market. Click here, to learn how you can minimise your risk when setting up a new business entity in Asia.

While good partnerships help make the journey easier, a business is nothing without a strong team to back up. Secure your business’ success with the right people internally by recruiting the best talent on the ground. Start building your winning venture with Links International.

Want to get access to the best Sales & Marketing talents and jobs in Asia? Links is an award-winning recruitment agency, get in touch with us now to see how we can help you achieve your career goals.